‘Alive Inside’ and the power of music

I was able to go see the documentary, “Alive Inside” this weekend and it definitely met and exceeded my expectations.

As many of you probably know, the inspiring project at the center of the film is best known by a clip posted on YouTube of an elderly African-American man named Henry, who is in the latter stages of Alzheimer’s. He lives in a nursing home and his caregivers say he is barely verbal, usually keeping his head down all day long. Then they put the headphones on, and play the beloved music of his youth. Like a switch, Henry becomes alive, and most surprisingly, quite verbal and coherent. The effect is truly amazing. The video has gone viral, receiving millions of page views. 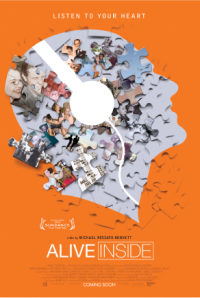 Dan Cohen, through his Music & Memory program, has a mission: he wants to bring personalized music to every nursing home resident in America. It sounds like a simple, clear-cut mission, but it turns out to be quite a challenge. Bottom line, there’s more profit to be made in the creation and marketing of ineffective medications than there is in Cohen’s proven grassroots program.

The benefits of music to those with dementia and other mental illnesses is astounding. Music has a greater impact on us than just making us tap our toes and fingers. Music touches the deepest parts of our emotional core, that usually remain intact even into the latter stages of Alzheimer’s.

Music has been part of my life for as long as I can remember. My dad would sing to me as a baby, I had a collection of Disney records as a little girl, and then I went on to develop my own eclectic taste in music as a teen and adult. Music can move me to tears or pump me up with energy. I can’t imagine life without music.

I wish I had understood the power of music better while my father was still alive, because I’m sure he would have loved to have heard Bing Crosby and Frank Sinatra.

Another point the documentary makes is how lonely and dehumanizing institutional life is for the residents. While music is not a substitute for human companionship, it can help fill a void.

“Alive Inside” is getting great reviews and I hope the buzz around the film will translate into donors who will help Cohen reach his worthy goal. If you have an iPod collecting dust, please consider donating it to this program.

One response to “‘Alive Inside’ and the power of music”