March 2019: I published my second book, CBD for Caregivers. This brief e-book offers a consumer-friendly overview of the hottest trends of 2019, CBD (cannabidiol) and its potential in supporting the physical and emotional health of caregivers.

March 2019: “Lesson from a Bully,” a personal essay I wrote about a childhood incident that sparked a moment of profound reflection as an adult, was published on the Women For One website.

September 2017: My collection of essays on caregiving, The Reluctant Caregiver, was published. To learn more about this project, follow me on Facebook and Twitter. To buy the book from your favorite digital retailer, visit Amazon or  Books2Read.

June 2017: My personal essay, The Bully and the Ghost, was an Honorable Mention recipient in the 43rd New Millennium Awards for Nonfiction.

August 2016: My idea of how to better support caregivers, Respite Care Share, was selected as a top 10 idea in OpenIDEO’s End-of-Life Care Challenge. Over 300 ideas were entered into the challenge. Respite Care Share would provide affordable, convenient respite options for caregivers, as well as a caregiver care package with gift certificates for personal care services focused on relaxation, such as spas and yoga studios.

A personal essay I wrote about my father, “Greetings from the Nursing Home,” was the recipient of the 2015 Rick Bragg Prize for Nonfiction. The Atlanta Writers Club sponsored the contest. Rick Bragg commented on the piece: “Strong, really strong. Made me choke up.” The contest judge commented, “The writer possesses such an obvious gift, the ability to push the readers into the darkest, most selfish part of their souls and demand they re-examine and reevaluate their moral compass. The manner in which this writer pressed home observations and admissions was, in a word, breathtaking. Undeniable compassion and honesty. Superb storytelling.”

May 2014 A post I wrote on LinkedIn’s Pulse platform titled, One surefire way to humble a workaholic, which is about caregiving and being a workaholic, generated over 83,000 views, over 540 likes, and over 240 comments. 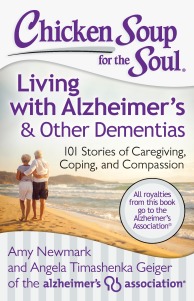 April 2014: A story I wrote about my dad and how those with Alzheimer’s can surprise you in wonderful ways appears in “Chicken Soup for the Soul: Living with Alzheimer’s and Other Dementias” series. This is a special edition, with all royalties benefiting the Alzheimer’s Association. My story is titled, “French Toast.”

November 2013: My mom was diagnosed with colon cancer just six months after my dad’s death. She had an emergency colostomy and developed multiple blood clots during her recovery. A personal account of how I cheered up my mom when she was in the hospital during that long summer of 2012 appears in the book, 101 Awesome Things to Do for Someone Who is Sick” by Elaine Wilkes. The same technique can lift the spirits of Alzheimer’s patients. (My entry is titled, “Find Something to Entertain Them” and is located on pages 228-229.) The award-winning book is an Amazon best-seller in Physician & Patient Caregiving and Eldercare categories.

September 2013: A story I wrote about the positive influence that pets can have on the lives of family caregivers appears in the collection, “25 Stories for 25 Years,” published by the non-profit Good Mews Animal Foundation, which operate a no-kill cat shelter in Marietta, Georgia. The book was sold as part of the organization’s fundraising activities.

One response to “Publishing Credits & Awards”