The news that coach Pat Summitt was stepping down as head coach of the Lady Volunteers was not surprising news, but it is a sobering reminder of how dementia can rob the most vital people of their precious gifts.

My dad was not a high-profile college basketball coach, but the impact of Alzheimer’s was still devastating. I can’t imagine what would have happened if Dad had still been working when his dementia symptoms started. Fortunately, he was retired. He often mused on getting a part-time job in Ruidoso, but he never did. Then it became too late. 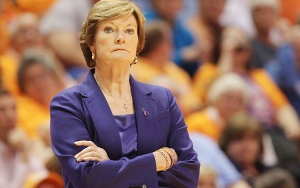 But even for those that are retired, there are chores, those daily jobs that we execute with barely a thought. But once my dad’s dementia progressed, completing the smallest jobs, like going to the post office to mail letters, or paying for an item at a store became difficult, then impossible. It was painful to watch my dad be robbed of performing the simplest of adult tasks. He was being forced back into childhood, with no hope of growing up again.

Summitt is such a strong woman and she already is a great advocate in the fight against Alzheimer’s. Maybe when people see vibrant, ultra-successful people like Pat Summitt battle this disease, they will take notice that this is an epidemic that we must focus on as a nation and world. The disease is claiming too many minds, too many lives, both known and unknown, but all loved by someone.

2 responses to “Dementia a robber”