Since it’s Father’s Day weekend, I’ve been thinking about Dad’s favorite dishes and restaurants. As I’ve written before, Dad was a very down-to-earth guy. I don’t know if he ever ate in a fancy 4-star restaurant before I came along, but I certainly don’t remember any lavish dining experiences as a kid. Dad certainly adopted the typical American diet of fast food well enough, and he enjoyed Americanized versions of ethnic cuisine, like spaghetti and burritos. He never was a steak kind of guy though, as he always preferred seafood.

He loved fish & chips. Back when I was a kid, we used to go to Arthur Treacher’s. You can watch this retro commercial of the restaurant from the late 1970’s. I so remember that ugly brown and yellow color scheme! I also remember the newspaper-like wrapper they would use to line the baskets of food. 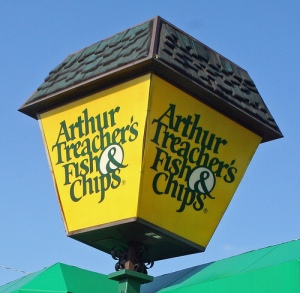 Dad loved the fish & chips platter. Mom usually ordered the same thing, and let Dad have a piece of her fish. I was all about the hush puppies!

But Dad would usually end up paying for the meal later. Too much malt vinegar and/or too much tartar sauce would give him digestive issues that would send him running to the bathroom. I clearly remember going to the park after a meal at Arthur Treacher’s and Dad clutching his stomach, with that sickly smile that he knew he had indulged too much in a favorite meal again. I remember dusk falling and Mom sending in a stranger to check in on Dad in the men’s bathroom, because he had been in there so long!

Still, despite those episodes, Dad loved fish & chips. I think they reminded him of back home and his brief time in England as a young man. A taste of his youth long left behind, replaced with the sunny palm trees of southern California.