Dad at Disneyland … without us

I found this photo recently of Dad with his sister Peggy at Disneyland, and it made me think about all the family drama surrounding her visit.

I was about 10 or so when my aunt Peggy and her family came from Australia to visit America. They made a stop in L.A. to see Dad.

You would think Mom and I would have joined Dad and had a good old family gathering. But that was not meant to be. 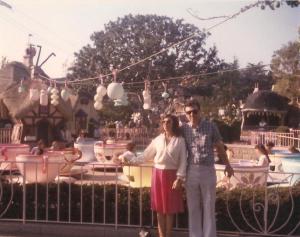 Mom was still very bitter over how two of Dad’s other sisters had treated her when they came to visit Dad from Ireland. If her version of events is correct, I don’t blame her, though Peggy had not been part of that earlier visit. Still, as a kid, I was prone to take Mom’s side so I said I would stay with Mom instead of going to meet my aunt Peggy.

I guess I have some regrets about that now, as I have never met her personally and one of us will probably die before that happens. I’ve been communicating with her (and Dad’s other sisters) via letters and they all seem very kind. Whatever bad blood there was before (if there was any to begin with) no longer exists.