Connection between hearing loss and dementia?

One topic I’ve seen latelyin the world of dementia news is that hearing loss could be a symptom of dementia. There is growing evidence suggesting that hearing loss speeds up cognitive decline in the elderly. Doctors think there may be a mental and physical component. Physically, the brain has to direct extra resources to help with hearing problems and emotionally, people become more socially isolated as their hearing loss becomes more profound. 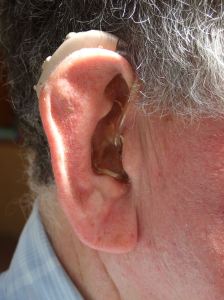 Dad did experience fairly significant hearing loss in the years before his dementia symptoms appeared. Mom suspected Dad was just using hearing loss as a way to tune her out, and I could see that as being a real possibility! But now I wonder if Dad’s hearing loss was the first sign of a much more serious health issue.

I think it would be a good idea if dementia screening became routine for elderly patients that complain of hearing loss. Many of the dementia screening tests are non-invasive, painless and quick to perform. Early diagnosis usually means more treatment options.

One response to “Connection between hearing loss and dementia?”