When I was going through Dad’s old photos and documents again, I came across a recommendation letter that I wrote about in a previous post This was from Dad’s New Orleans years. I know very little about that time period of Dad’s life. At least the date on the letter, March 12, 1959 gives me some point of reference. Dad left Belfast quite young (I believe Aunt Maureen said Dad was 17) and worked a couple of years in England. Then he came to America in the early 1950s and lived in New York City (primarily Brooklyn I believe). By 1959 he was obviously living in New Orleans. By 1965, he was living at the Cecil Hotel in Los Angeles, according to his naturalization record. 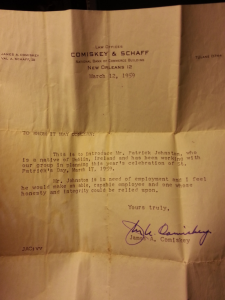 I’ve been trying to piece together more on that New Orleans period. I happened to Google the man’s name on the recommendation letter, James A. Comiskey and discovered that he became a federal district court judge and was outspoken about civil rights. He died in 2005.

You never know what you might stumble upon when looking through old documents that seem to be mundane in nature. I highly recommend taking a second look at any photos or documents you have of loved ones because they may contain interesting bits of history just waiting to be discovered.

3 responses to “Taking a second look”