While the circus that is this year’s presidential election performs around the nation, I thought it would be appropriate to post this hilarious letter to the editor that my dad wrote back in the 1960s.

In his letter, Dad argues why we’d be better off with a woman for president. Before you go giving my dad credit for being a progressive, the letter is satirical in nature and his reasons for wanting a woman as president are well, pretty darn sexist. Still, it made me chuckle, especially the line about Phyllis Diller. 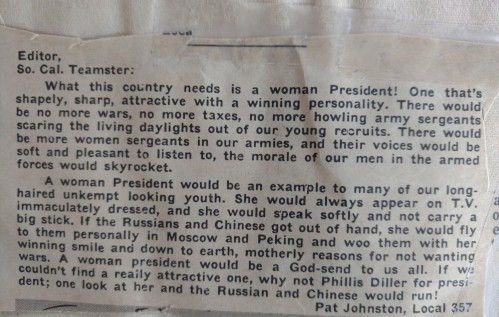 After reading some other letters Dad got published in newspapers around the same time, Dad sounded like quite the traditionalist. This was surprising, because my mother was definitely the dominant member of our family, and while a dedicated housewife and mother, she had strong opinions and was not afraid to share them. Perhaps life in America had caused Dad to reconsider his earlier views by the time he met my mother. At any rate, I never was subjected to any of Dad’s more sexist viewpoints when I was growing up. He always talked with great respect about women in history, like Eleanor Roosevelt, so seeing this other side of Dad is interesting.

What perhaps is the biggest takeaway is that even though a woman is now a front-runner in this year’s election, Hillary Clinton still faces some of the same issues raised in Dad’s letter. Putting politics aside, she is scrutinized more in looks, dress, and tone than her male counterparts. So while women have come pretty far in the last 50 years or so, some things haven’t changed.

For the record, Mom was never a big fan of Phyllis Diller. I remember this because Mom wasn’t one to voice her dislike for a celebrity very often. She loved to laugh and enjoyed most comedians. I don’t think she “got” Diller’s wacky persona, which is ironic, since Mom was pretty eccentric herself!

One response to “Dad’s surprising pick for president”