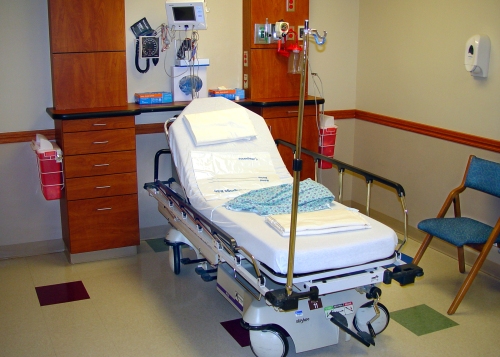 One of the most frightening calls I received when Dad was in memory care was that he had been taken to the emergency room. Unfortunately, I received several similar calls over the course of the year Dad was in residential care.

The emergency room visits were usually prompted by falls. Even if Dad seemed OK, regulations required the memory care staff to send Dad to the hospital to be checked out. The worst part was that no staff member accompanied Dad. I can’t imagine the confusion Dad must have experienced, on top of his dementia, with the chaos that accompanies an emergency room visit.

Even for a person without dementia, the emergency room is a daunting experience. I’ve only been to the ER  once as a patient, in high school, and it was an exhausting, fruitless experience. I’ve been to the ER several times with others having medical issues, and it is always a nightmarish experience. Why do medical emergencies seem to always happen in the middle of the night? Really though, it doesn’t matter if it is high noon, emergency rooms and hospitals in general seem to be caught in a time warp where it always feels like it’s 3 a.m.

There is so much hurry up and wait. People rushing in and out. Poking, prodding, medications being shoved in your face, or pumped into a vein. So many questions that have to be answered rapidly, and repeatedly. It’s enough to rattle a mentally sound person.

That’s why I am optimistic that some hospitals are reinventing the ER experience for those with dementia. Lutheran Medical Center in Denver was recently profiled for its Senior ER program. They’ve taken half of their emergency room space and retrofitted it to make it a more soothing, less chaotic experience. Everything from mattress thickness to lighting and noise level has been moderated to prevent the onset of delirium, which can hasten death.

The Senior ER has been such a success that people of all ages are asking to be admitted to that wing.