Mom was telling me today that even after Dad’s dementia had progressed, Dad would still request a beer at night as had been his nightly habit since he was an adult. (Well, back in the day, after putting in a long day at the trucking company, it would be a few beers.) 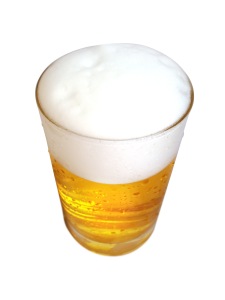 Mom said Dad would just sip the foamy head off the beer and then forget about the rest of it.

He would wear a moustache of beer foam, like a confused clown, until Mom would help him wipe it off.

Poor Dad, robbed of even the smallest of pleasures.

Trips with dad to Liquor Barn

It may seem odd to have happy childhood memories about hitting the liquor store with your dad, but I do have fond memories of our trips to Liquor Barn. I did a Google Search and was surprised to see that the chain still exists, albeit not anymore in Southern California where I grew up. The store was a giant warehouse stocked floor to ceiling with adult libations. This was not the sleazy, bars-over-the-windows shack that some people associate liquor stores with. It was very clean, quiet and frequented by a polite suburban clientele.

My dad was mainly a beer drinker, though he did like a nice glass of brandy now and then. We went to Liquor Barn to find the imported beers he couldn’t find anywhere else. I loved looking at all of the colorfully-labeled bottles, and the way the sun would glisten off the clear bottles filled with gold, amber, emerald and sapphire colored liquids. I remember dad being happy when he could find a rare import, instead of being stuck swilling Michelob or Dos Equis.

Near the end of his life, when dad was still living at home, my mom would “allow” dad to have a half a beer at night, hoping it would help him sleep through the night, as the dementia caused his internal clock to go haywire and he would often get up and roam in the middle of the night. Honestly, I probably would have let him have the whole bottle, as long as it wasn’t going to have a negative interaction with any medications he was on at the time. My dad was a simple man who enjoyed simple pleasures, and in the end, Alzheimer’s robbed him even of those things.