These are a bit on the large side, but remind me of what Mom’s corn cakes looked like. George Wesley & Bonita Dannells/Flickr https://creativecommons.org/licenses/by-nc-nd/2.0/

The upcoming holiday season and cooler weather has me thinking about food and family traditions. Mom always had a big stack of newspaper clippings to go through each time I visited. They were on all sorts of random subjects, and she would write notes on them to share with me. After Mom died, I came across a stack that we had gone over but that she had kept. In the collection was her take on a cornbread recipe that had been published in the local newspaper.

Mom was not pleased with the recipe, and scribbled her “corrections” all over it. Mom learned how to make cornbread, and more importantly, corn cakes (also called hoecakes) from her mother, and the family recipe was adamant about no sugar. Cornbread was to accompany savory dishes like greens with pot likker, or pinto beans. It was not dessert. 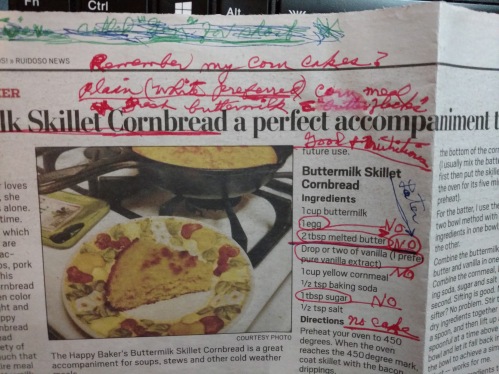 I was able to find a couple interpretations of hoecakes that Mom would have approved of online. The Salon headline is perfect: You’re Doing it Wrong: Cornbread and offers a bit of history on the hoecake as well as a super-simple recipe. Mom’s recipe was very similar in that she omitted the egg and sugar, but she used buttermilk instead of just water.

On the newspaper article that was published just six months before she passed, Mom wrote in red ink, “No cake” after writing “no” next to such sacrilegious ingredients as sugar, egg and vanilla extract. She wrote at the top, “Remember my corn cakes?”

Indeed I do, they were one of my favorite meals as a young child. Dense discs of cornmeal, fried to a golden brown, soaking up butter. (Mom likely was using margarine, which was a shame, but I didn’t know any better as a kid.) I think I had a side of beans with mine, because my young palate couldn’t stand the concept of collard, mustard or turnip greens. The funny thing is, the way Mom made them, without any added flour, the hoecakes are naturally gluten-free. Now I would appreciate them with a “mess of greens” just like Mom.

One of these days, I’ll get around to making hoecakes, and there won’t be any sugar in sight. When I do, I will smile and think of Mom.

I’ve written previously about our favorite takeout meal, but most of the time Mom cooked for us on the weekends. When I was in high school, I had a part-time job at Alin’s Party Supply and Dad was working as a security guard. We both worked all day Saturday, so when we came home, we were starving.

One of our favorite Saturday suppers was when Mom made chili. Mom was no gourmet chef, but having been born and raised on a farm, she knew her way around a kitchen and how to cook up family-pleasing meals. The chili was one of those all-day affairs, where you let it simmer for hours on end. Dad and I would each have a heaping bowl, topped with shredded cheese and green onions, and would usually end up going back for seconds.

The battle was over the cornbread twists.

These were not homemade, just a product out of one of those twist-pop cans from Pillsbury. My mom certainly was capable of making real cornbread, and did on other occasions. (No sugar or egg, just like the way her mother made it.) But once these cornbread twists were on the market, they were such a hit with Dad and I that Mom didn’t have to worry about making cornbread from scratch anymore.

You could make them as the traditional twists or you could take two of them, wrap them together, and turn them into muffins. Mom says I told her, “Yeah, those are good, but Dad eats too many that way. Just make the twists.”

I guess Mom was having a nostalgic moment recently and wondered if Pillsbury still made the cornbread twists. I checked for her and they don’t, but from reading the numerous online comments, we weren’t the only family that enjoyed them. Hopefully wherever Dad is now, he can eat his fill of those cornbread twists along with a heaping bowl of chili.