A followup to Fonzie

Yesterday, I wrote about how as a toddler, I thought my dad looked like Fonzie from “Happy Days.” Well, I now present photographic evidence that my adoration of Dad/Fonzie went beyond just that cardboard cutout in the store. 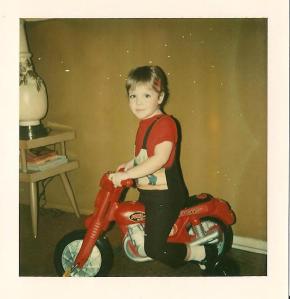 Yes, it’s the Fonzie bike. I’m sure I thought I was the coolest kid on the block riding this bright red contraption. And I’m sure for once, Dad didn’t mind shelling out the dough for a kid’s toy, since I had paid him such a nice compliment in the grocery store.

I love how my outfit matches the bike’s color scheme! The bike had decals on it with “Happy Days” catchphrases, including “Sit on it!” and Fonzie’s favorite expression, “Ayyy!”

Eventually I ended up with a Powder Puff big wheel cycle, decked out in pastels with floral decals and plastic streamers flowing from the handles. It was pretty and I enjoyed it, but it didn’t have the same cool factor as the Fonzie bike.

When I was about two or three, the TV show “Happy Days” was quite popular. I remember watching some of the later episodes as they aired and then caught up on the older episodes during reruns. The character that epitomized cool, Fonzie, became the focal point for commericals and related merchandise. His trademark expression, “Heyyyy …” became part of the American lexicon at the time.

There were advertisements for the show all over the place, including at the grocery store, where there was a life-sized cardboard cut-out of Henry Winkler as Fonzie, with leather jacket, slick-backed hair and upturned thumbs. My mom was wheeling me around the grocery store in the shopping cart when my eyes locked on to Fonzie.

“Dada, Dada, Dada,” I cried out excitedly. I guess I thought Dad was a pretty cool character when I was a toddler. He loved telling the story about how I thought he was Fonzie, as it gave him reason to puff up with pride and indulge in a bit of vanity, which he didn’t do very often.