When our departed loved ones return (in our dreams)

Recently, I had a disturbing dream that on the surface sounds like a nightmare. In the dream, I saw my mother’s corpse. It wasn’t in a coffin, but placed on some kind of shelf. Then she woke up and began moaning and talking.

I remember in my dream trying to tell myself it was just a dream, as it is recommended to do to wake yourself from a nightmare. But instead of Mom going into full zombie mode on me, the dream took more of a domestic drama turn. Instead of being chased by a flesh-eating monster, I faced a chilling dilemma: how would I manage caring for my mother again? As with most dreams, there was no satisfying conclusion but lingering questions about housing and financial issues.

At least I know why I had such a bizarre dream. There was a story in the news about a woman in Detroit who had been declared dead but was found alive in a body bag hours later at a funeral home, where she was about to be embalmed. The images of the bodies of COVID-19 victims being stacked haphazardly in storage rooms and sheds has also haunted me.

It was a disturbing dream, but it intrigued me more than frightened me. This scenario has been played out in books and films but considering it from a caregiver’s perspective presents more practical questions than supernatural ones.

Moan from the past

So Mom is back in the hospital and the small town hospital she is in has been eerily quiet. We were told there were only two patients that were inpatient last night, including my mom. Today, that number swelled to five. There was one patient in particular that made himself known, because he was in so much obvious pain.

He would moan, starting low and working his way up to a pitiful, alarming wail. It was very disturbing and continued for hours. I heard the nurse say they were giving him his pain medication, but the poor man didn’t seem to be able to find relief.

The moans reminded me of my dad, when he would have nightmares at home. I’ve written many times before about the vivid nightmares my father would have, and the moans he would make, the desperate calls for help that would escape his mouth sounded so much like the patient in the hospital.

So we went from eerily quiet to an eerie reminder of Dad in distress at the hospital today.

I’m not sure if dad’s vivid nightmares began before or after the haunted hotel experience. Growing up, I remember both my mom and I being frightened by the screams and moans my dad would make when he was suffering from a particularly bad nightmare. I’m sure it was not fun for my mom to be awakened by my dad’s thrashing and yelling. She said sometimes it would take her quite awhile to wake him. He then would bolt upright in bed, wide-eyed and with sweat lining his brow. “Oh, that was a bad one,” was a typical response. 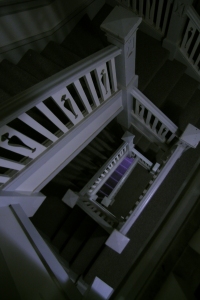 When he could remember the dreams the next morning over breakfast, they usually consisted of the “bad man chasing me” variety of nightmares. Dad was usually a pretty calm, quiet kind of guy, so when he exhibited the kind of fear he did when he was having a nightmare, we knew he wasn’t being dramatic. The bad dreams didn’t happen that often, maybe a handful or so a year, but I can definitely recall waking my dad up from a bad nightmare on more than one occasion in my childhood. It was a bit of a role reversal in the family unit, as usually it’s the parent that has to soothe the child and convince them there’s not a monster under the bed.

It does make me wonder if Dad continued to have nightmares as his dementia progressed. If so, was he able to comprehend that it was just a dream and not reality?