Dad doped up at the nursing home

I saw this article the other day about Johnson & Johnson paying out a $158M settlement over Risperdal. I took notice because unbeknownst to us, dad had been prescribed the generic version of this drug (Risperidone) at the assisted living facility he resided at for ten months. The drug is to be used in treating adolescents with schizophrenia and other mental illnesses. The FDA has not approved this drug for use in the elderly with dementia, but it is commonly used anyways, and is legal to do so. In these cases, studies have shown an increase in stroke risk and an overall increased risk of death. The list of common medications Risperidone can interact with is disturbing as well. 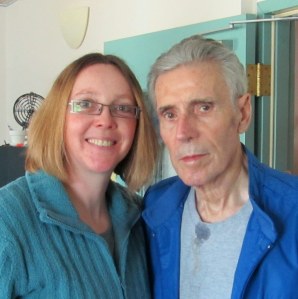 Dad and I at the assisted living facility, March 2011.

I’m sure nursing home staff would defend their use of such medications as a way to keep patients calm and safe, especially when aggression and violent outbursts can be a symptom of Alzheimer’s and related dementias. My mom never liked the fact that they could wander in and out of each other’s rooms, but what was the other option, lock them up like animals in a cage?

I clearly remember my first visit to the facility where my dad was living. It had a separate, secure wing that was just for dementia patients called the “memory care” unit. I’m not sure what I expected to see, I guess something closer to an asylum than a daycare. But what I saw was eerily comforting, a bunch of seniors just sitting around calmly, while workers scurried about, cleaning up bladder and bowel accidents and doling out the meds that no doubt kept these patients in some twilight state somewhere between being stoned and being in a coma. I’ll venture a guess that dad wasn’t the only one being given Risperidone on a regular basis.

When I first saw my father, I couldn’t help but think of a zombie. He was shuffling down the hallway, wearing a gray t-shirt which had a noticeable wet spot on it (later I learned it was from his constant drooling) and Scooby Doo pajama bottoms and canvas slip-on sneakers. At first, I could not believe it was Dad because Dad had never owned a pair of sneakers, and he certainly did not lounge around in boy’s pajamas festooned with cartoon characters in his former life as a normal person. But the bony frame, the steel-tinted shock of hair and the eyes, still emerald green but no longer gleaming, that mouth set in a tense slash of determination, those all belonged to my father. I walked slowly to him, wanting to run, afraid he would vanish into thin air, then chiding myself for wishing that he would, to be put out of this benign yet suffocating version of hell. Instead, I said, “Hi Dad,” as naturally as I could and as his eyes searched mine in some feeble attempt at recognition, I wrapped my arms carefully around his fragile and stiff frame, while whispering raggedly into his ear, “I love you.”