Mom is still doing well and is able to get out on her own to be around people, which is important to her to stave off depression. She still misses Dad immensely, and being so ill over the past six months has made the loss of Dad even more difficult.

She recently went to Subway, one of her favorite fast food places. Every time she goes, she has to tell me the story of how Subway played a key role in her hitting a lottery jackpot. 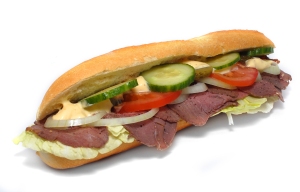 It was my parents’ anniversary, and Dad was in the early stages of Alzheimer’s. He was becoming more of a homebody as the disease began to progress, as having to place orders and pay for items confused him and stressed him out. He didn’t want to go out that night, but Mom insisted. And the only way she was able to drag him out of his burgundy chair and away from a classic movie on TV was by suggesting they go to Subway. Dad loved their meatball subs.

He relented, and well, the rest is history. Mom nabbed a winning lottery ticket and Dad enjoyed his hot and tasty meatball sub sandwich. Not exactly a romantic anniversary dinner, but definitely a memorable one!

Usually Mom doesn’t order the meatball sub, as she prefers something lighter like tuna salad. But she must have been feeling extra nostalgic the other day, as she said she ordered the meatball sub for herself.