As an immigrant to the U.S., Dad took his voting duties seriously. Mom never remembers him missing an election, except in 2008.

By then, Dad was mentally drifting quite a bit. I do remember having a few phone conversations with Dad about the upcoming election back then. Sometimes he would be coherent, other times, he could not finish his thought. As I’ve mentioned before, Dad was a Kennedy-loving Democrat. I don’t think he would have predicted a black man being elected U.S. president in his lifetime. Unfortunately, he was not well enough to participate in the historic election. 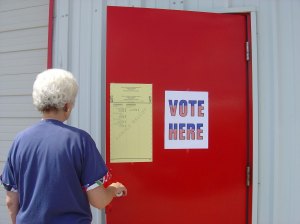 After that, Dad sunk into the black hole of dementia. During one of Dad’s many hospital stays, the staff was trying to assess Dad’s mental state. They asked him who the president was. Dad’s eyes were blank. His mouth didn’t move.

If there’s an election in the afterworld today, Dad is voting Kennedy all the way. 🙂