I’ve written before about how Dad relied on the guys at work for car advice. He also ended up with several “great deals” on what Mom and I politely referred to as junk. Dad was a bit of a chump when someone at work was looking to sell an item and gave Dad a slick sales pitch he couldn’t refuse. This is how we ended with the “haunted” television.

Our former TV had gone on the blitz but Dad, being a cheapskate, decided to look for a deal. (And I mean that in a loving way. Clark Howard would have approved of Dad’s penny-pinching ways.) He mentioned it to the guys at work, and sure enough, someone had a “gently used” TV to sell Dad. It was working just fine, Dad was told, they only wanted to get rid of it because they were getting a new set. I don’t remember how much Dad paid for it. Not much, but a penny was more than it was worth. 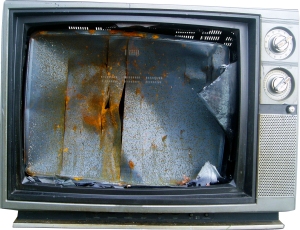 I remember how proud Dad was when he lugged the big behemoth into the house. We plugged it in and everything seemed to be working fine. This was before remote controls were standard with television sets, so we turned the dial and the local channels appeared, some with more static than others. We were used to flipping around the rabbit ears like magicians to get the best image. (That’s right, we didn’t have cable, either. I never saw any cable TV channels until I was in college.)

By this point, Dad was bragging about how good of a deal it was and how we had been wrong to doubt him. We were all sitting on the couch, and all of a sudden, the television’s volume, which had been turned down to low, leaped to blaring at maximum force. I covered ears while my parents ran over to the TV. The volume knob was useless, as the TV continued to play at top volume. Finally, one of them turned the power off. Blessed silence returned to our house. My mom and I exchanged knowing glances and then waited for Dad to respond.

“It’s probably just a little glitch, it will work itself out,” Dad tried to reassure us.

But the TV, which we started referring to as “haunted,” continued to have its volume fits. It was especially a problem late at night, as I would be trying to sleep and my parents were night owls. We all probably lost a few pounds running to the TV to turn it off when it started blaring randomly. I believe it was a few months before we finally wore down Dad’s stubborn streak and convinced him to buy a new TV and kick this lemon to the curb.