If we had kept Dad at home

The Alzheimer’s Prevention Initiative is seeking those willing to talk about why they signed up with the registry. As I indicated that I would be wiling to speak out for the cause, I started thinking about my reasons for being an Alzheimer’s awareness advocate. The obvious reason is because of my father’s battle with the disease.

But I also hope to encourage others to not make the same mistakes I made. #1: The rare visits. If I could go back in time, I would have visited more, both when Dad was still at home and when he moved into the nursing home. #2: Being uncomfortable around Dad’s unpredictable behavior. If I had it to do over again, I would tell my former self to get over it and embrace the now, instead of regretting that Alzheimer’s had stolen much of Dad’s former self. 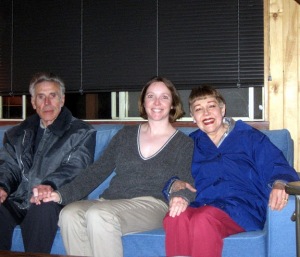 It got me to thinking about one aspect of Dad’s care that I never really thought about before too much. Wonder if Mom and I had somehow managed to keep Dad at home, instead of him being transferred to the nursing home for the last year of his life? I most likely would have had to quit my job, but hey, a year and a half later, I quit my job to take care of Mom. Maybe somehow with home health care, we could have managed Dad at home, even as his Alzheimer’s progressed.

This is one aspect of Dad’s care that I don’t regret. I think the stress of trying to care for Dad at home could have broken our family apart. And while I was not fond of the medications Dad received at the nursing home that turned him into a zombie, at home, he may have refused to take any medications, and who knows if those angry outbursts would have become more violent and dangerous?

I know there are many families who do keep their loved ones with Alzheimer’s at home and care for them until they pass away. I admire and respect that choice 100 percent. I think family caregivers need to receive more financial and community support. But on the other hand, I also respect the choice of placing your loved one in a good facility, where they can receive the supervised care they need.

One suggestion I would make