The most difficult lessons of caregiving

I finally had the chance to read Jai Pausch’s memoir, “Dream New Dreams.” She was the wife of Randy Pausch, the professor who gave the moving “Last Lecture” that went viral a few years ago. As you may remember, Randy bravely battled pancreatic cancer, and Jai served as his primary family caregiver. The couple also had three young children at the time. The memoir covers all of the aspects of caregiving and the physical, mental and emotional impact being a caregiver has on an individual and a family. Jai Pausch writes with honesty and bravery. I highly recommend the book to other caregivers. There is a lot you no doubt will relate to in this book. 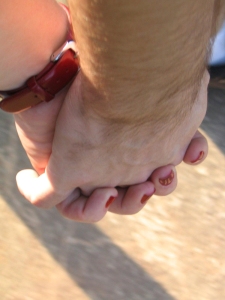 One of the most poignant and enlightening moments of the memoir for me comes near the very end of Randy’s journey with cancer. Jai does not sugarcoat the impact that cancer had on their relationship as husband and wife, and how she often struggled to maintain the household, raise three young children essentially alone, and try to be a loving caregiver to Randy. In the last month of his life, they make one last trip together for an experimental cancer treatment. Jai admits that they were not getting along. In front of a social worker at the hospital, Randy said something about his wife that hurt her deeply.

“He said he felt I was unempathetic: doing a great job of all the things anyone could do, and a terrible job on the things only I could do.

Wow, what a devastating statement from a dying man. Jai was of course wounded by this accusation, as any family caregiver would be. Here she was, running the household, paying the bills, taking care of three kids under six years of age and being a caregiver for a cancer patient, and he had the nerve to complain? Jai really didn’t think she could do any more than she was already doing.

Jai recounts what their wise psychologist suggested when Jai told her the crushing words Randy had said: “He wants you to tell him you’re going to miss him when he’s dead.”

That is blunt advice to be sure, but it was a breakthrough moment for Jai as a caregiver. Jai was working so hard to maintain a stoic exterior, to not make Randy feel guilty about how much pain she was going to feel when he died that she was coming off as cold and uncaring to him. So on the doctor’s advice, she went to Randy and cried and expressed how much she was going to miss him. Jai says Randy was comforted.

I think this is a great lesson for all of us caregivers. We work so hard to be invincible that sometimes we forget we are human. While we may want to shield our sick loved ones from much of the pain, sadness and frustrations we feel, we should not do so at the expense of cutting off emotions altogether. Randy was right: almost anyone can perform the physical duties of caregiving, but the love you have for that person is unique and only something you can express. Take time to show how much you care.

One response to “The most difficult lessons of caregiving”