Time marches on, with or without us

Today it has been five months since my mother died. With the crisp mornings of fall now greeting me each day, it’s the second season I’m experiencing without Mom. It will be the first year without a Halloween card from Mom, a holiday we both enjoyed and that my mom always tried to make fun for me as a child.

I was looking through photos and came across one from just about a year ago. It was taken in Nov. 2014, when Mom was already beginning her final battle. The pain was at least somewhat bearable then, but she’d already been to the ER.

It’s one of the last pictures I have of the two of us together. She’s still smiling, still has her makeup on, was still Mom. 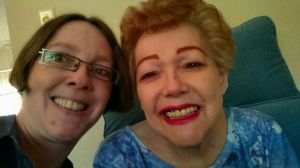 Even though she wasn’t well then, little did we know that six months later, she would be dead.

I guess I can take some solace in the fact that she didn’t suffer that long, though it felt like to me she did. Some people can go on for years suffering much worse than my mom did.

I’m glad I made the tradition of taking selfies with Mom at the end of each trip home, even if they are not of the best quality.

We have to capture the fleeting happy moments together as best we can.