For most of his career, my dad worked a swing shift, so he would eat dinner late at night and have “breakfast” later in the morning when he woke up. I say “breakfast” because what my mom would serve him after waking wasn’t your typical breakfast food by a long shot. Clam chowder was a favorite, as was baked halibut. I clearly remember the disconcerting aroma of fish wafting through the house at ten in the morning.

And being from that generation that consumed coffee like water, he always had a cup of coffee with every meal. He also enjoyed V-8, and I can still remember how the viscous beverage left a film around the glass that always disgusted me. 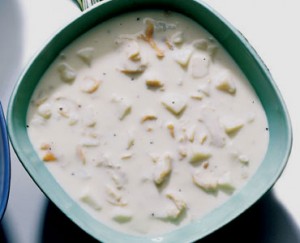 Dad also had a sweet tooth, so that meant a lot of jelly or honey with his toast. He would usually watch the news while he was eating or maybe just sit and “listen” to mom chatter as she did her daily chores. Then it would be time for him to get ready for work and do it all over again.

At the end of his life, I remember the palliative doctor asking us what dad’s favorite foods were, as they were going to remove the feeding tube and start hand feeding. “He loved fish,” I said without hesitation. They proceeded with the hand feeding over the last month of his life, but I’m not sure if he ever had the chance to taste fish again in this world. That’s when you know it’s time to let someone go, when they can no longer take pleasure in the simple things that nourish our body and soul.