Dad in the garden

Dad was not a big fan of the outdoors. Mom pointed out recently how he would never sit out on the quiet, peaceful back deck of their condo. He did enjoy going on long walks, but that was about the extent of his connection with nature.

But at the assisted living facility that Dad was at for almost a year, he loved to wander the grounds of the garden. It was safely enclosed to make sure the “Memory Care” residents didn’t wander beyond the walls of the facility, but it also didn’t seem like a prison. I remember Dad taking jerking, stumbling walks around the sidewalk that lined the garden and encircled a gazebo area, where families could “socialize” with their loved ones. 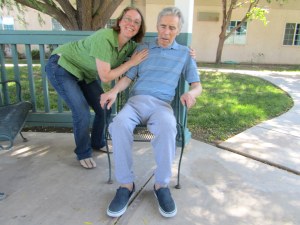 The last photograph of dad and I together, July 2011. We are in the garden that was attached to the memory care unit of the assisted living facility.

Other than one “field trip” it was the only time Dad was able to breathe fresh air, to escape those long, dreary hallways of the locked ward that he was confined to due to his dementia. I’m not sure if he felt better outside or not. Towards the end of his stay there, it was so hard for him to get comfortable. We were never able to fully understand why. I guessed it was because he was so emaciated and the hard metal outdoor chairs hurt his body. At any rate, he could never sit still for long. He would have to fight his mind and body hard just to stand up again, then he would be off on his tottering pace that had me racing to catch up to him and offer him support.

Dad never had a green thumb, but at the end of his life, he learned to appreciate his time in the garden.