When you lose a family member, well-meaning people usually say that things will get easier as time goes on.

But I don’t think that’s entirely true for everyone. Certainly, time marches on. But how one reacts to a death of a loved one, how they process their grief, well, that’s really a very individual process. I’m sure there are plenty of statistics and surveys out there that say generally speaking, people’s grief lessens after x amount of time. I think most of us know that when it gets personal, stats go out the window. 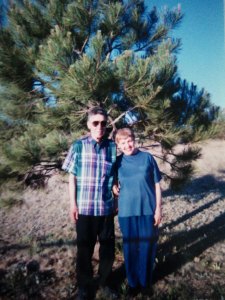 Mom and Dad in Ruidoso.

I’ve been thinking a lot about Dad lately, and that is understandable. The one year anniversary of his death was December 20th. Then it was the holidays. Certainly I have not been sitting curled up in a ball crying my eyes out with grief, but the pain still ripples through my heart. The guilt over what I would have, should have done differently still is something I’m working through.

Mom also remains grief-stricken, so I have to deal with that as well. On New Year’s Eve, she found a copy of the message she wrote in the 40th anniversary card she gave to Dad, the one she had cremated with him. While everyone else was ringing in the new year, Mom was grieving.

Tonight, she broke down again, letting me know she tells Dad every day that she loves him. Her message is always the same. She misses Dad dearly, but the way he was before Alzheimer’s. She could not wish him back the way he became with dementia.

So for some people, grieving the loss of a loved one does become easier. For others, it may change shape and form, but it is still a pain buried deep within the heart.