Tag Archives: half a life

Other people’s memories: “Half a Life”

A memoir that relies heavily upon the memories of a single life-changing event is “Half a Life” by Darin Strauss. I’m sure you’ve read many stories about a tragic car accident that claims the life of an innocent person. While often alcohol and drugs are involved, sometimes these events are truly accidents, with no direct fault assigned to the person behind the wheel. Have you ever wondered what happens to these people? To know, even if you weren’t directly at fault, that your actions claimed the life of another human being … how would you manage to go on with your life carrying that memory? Well, author Darin Strauss knows, because he was the person behind the wheel of the car that struck and killed a classmate who was riding a bicycle. 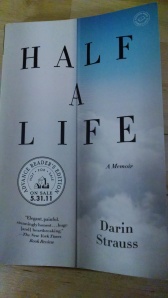 Strauss had just turned 18, and perhaps the inattention and inexperience of a young driver played roles in the accident. Still, no charges were ever filed and his community, even the deceased classmate’s parents seemed to forgive Strauss. But then the grieving parents decided to sue Strauss for millions of dollars, and the case dragged on for several years, thwarting Strauss from moving on with his life. Even though he saw a therapist, he never worked through his guilt and other feelings surrounding the tragedy. He did what many of us try to do during difficult situations: he put a smile on his face and carried on, suppressing his emotions.

The memory of the accident haunts all facets of his life, from work to friendships to the dating scene. Not only do the lingering memories of the accident have a negative impact on his emotional well-being, they physically make him ill and he has to have stomach surgery before turning 30.

Finally, as he marries and becomes a father, he decides to engage in the best therapy of all for a writer: he would write about the experience in a memoir. The result is a powerful work, and a lesson for all of us trying to process difficult memories. I was very moved by this book and highly recommend it.